The original iTaipei app included about 200 functions. The diverse and chaotic services made it hard to attract new users or retain old users. Besides, many services provided by the government can be replaced by other third-party services. This makes it even more difficult for citizens to use the official e-government app that is usually considered unfriendly designed.

We eventually provided an app solution focusing on Proactivity, Consistency, and Personalization. This project was highly valued by the city government and later influenced their focus on digital public services.

iTaipei was the second project I was involved in at AJA Design Agency. The government of the capital city in Taiwan has developed 25 apps, but most of them receive low ratings on the app stores. Therefore, the government approached AJA for redesigning one of them, iTaipei, to make it desirable for most citizens.

My Role in the Team

iTaipei is a mobile app released by Taipei City Government, providing about 200 functions and information about transportation, Accommodation, Travel, News, and e-government services, and so on. The government also planned to include payment services (pay.taipei) into iTaipei app.

We conducted internal stakeholder interviews at their workplace to gain insights into their jobs and how they might influence e-government approaches. Subsequently, we identified the scope of this project, and the government stated they hoped it could serve the needs of all the citizens.
‍
We also redefine some narrowed problems, because the low number of app users could originate in many areas, such as the gap between supply and needs, citizens’ habits of digital life, information architecture within the app, or even the way content and the services are displayed. Here are the aspects we looked into: 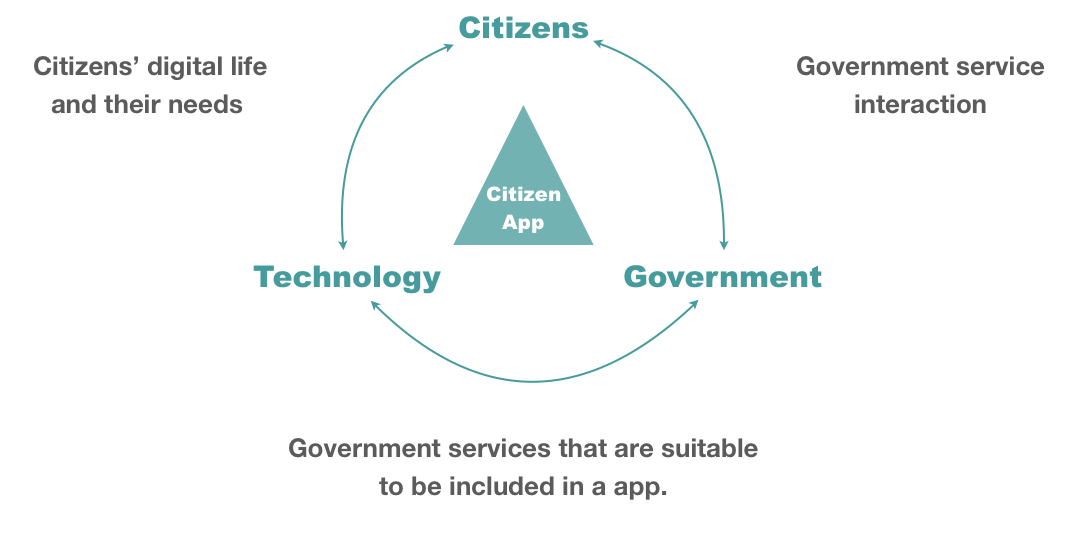 Numbers at A Glance

Methods used to understand the framework 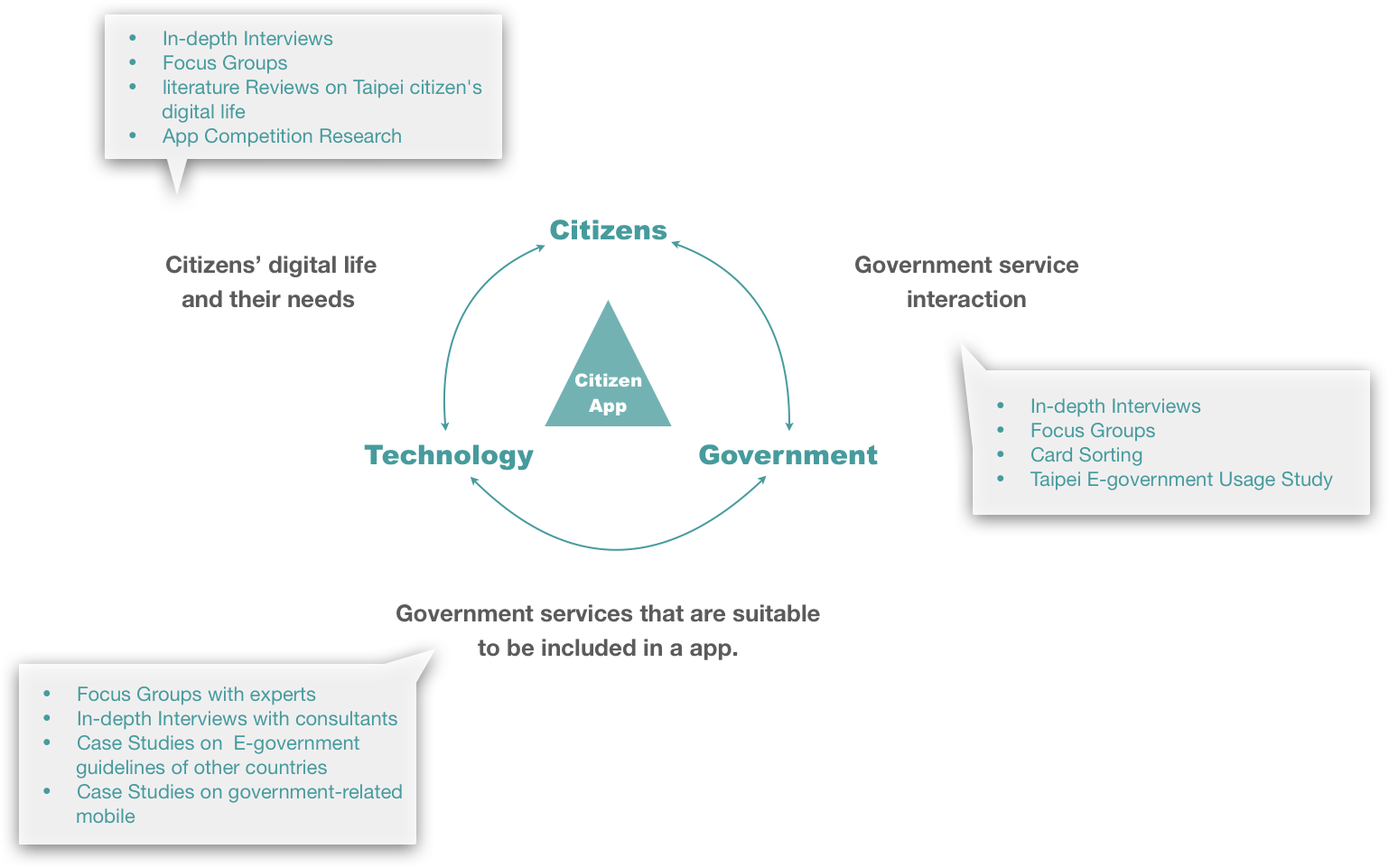 To anchor comprehensive research, we started with understanding the current situation of iTaipei and getting the whole picture of all the digital services provided by the city government through analysis of the metadata, such as app documentation and data from Google Analytics.

​At the same time, we collected e-government guidelines and public service apps of other countries to understand how others are coping with digital public service problems.

To ensure representativeness, we carefully underwent the recruitment process. We planned to have 4 groups of citizens who were in different life statuses based on the finding of the desk research. There are the basic assumptions to each group:

Numbers of participants recruited in each group 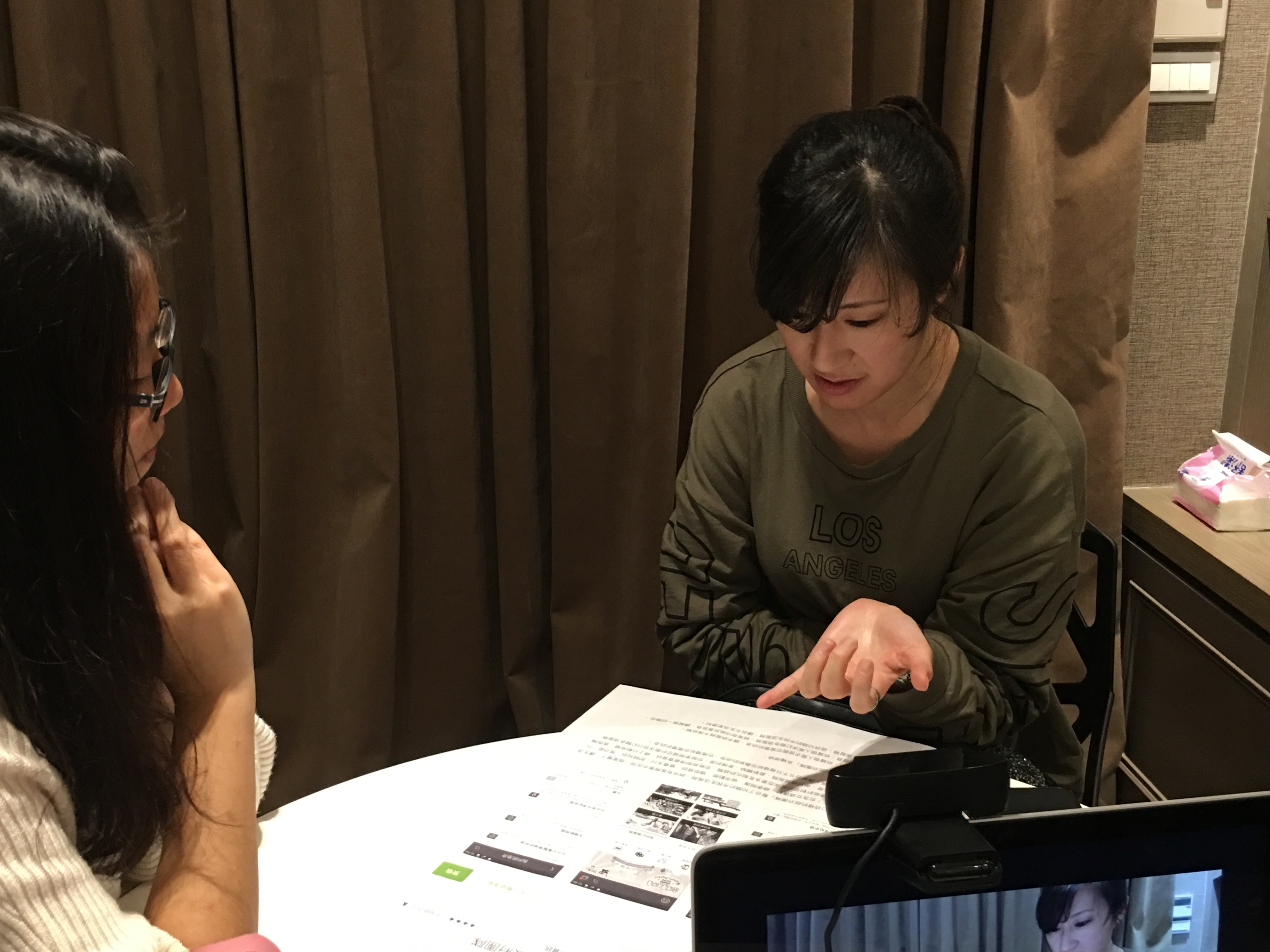 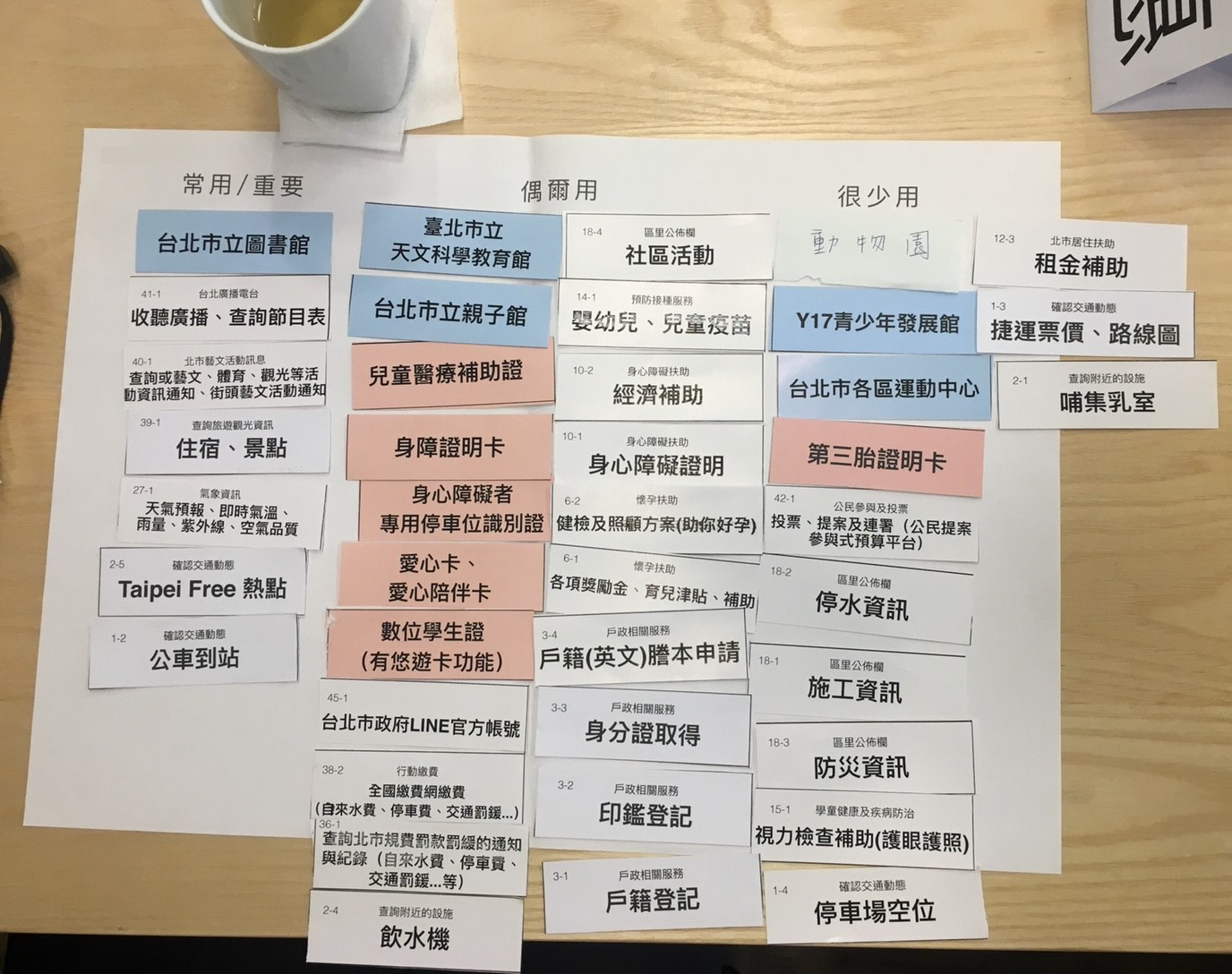 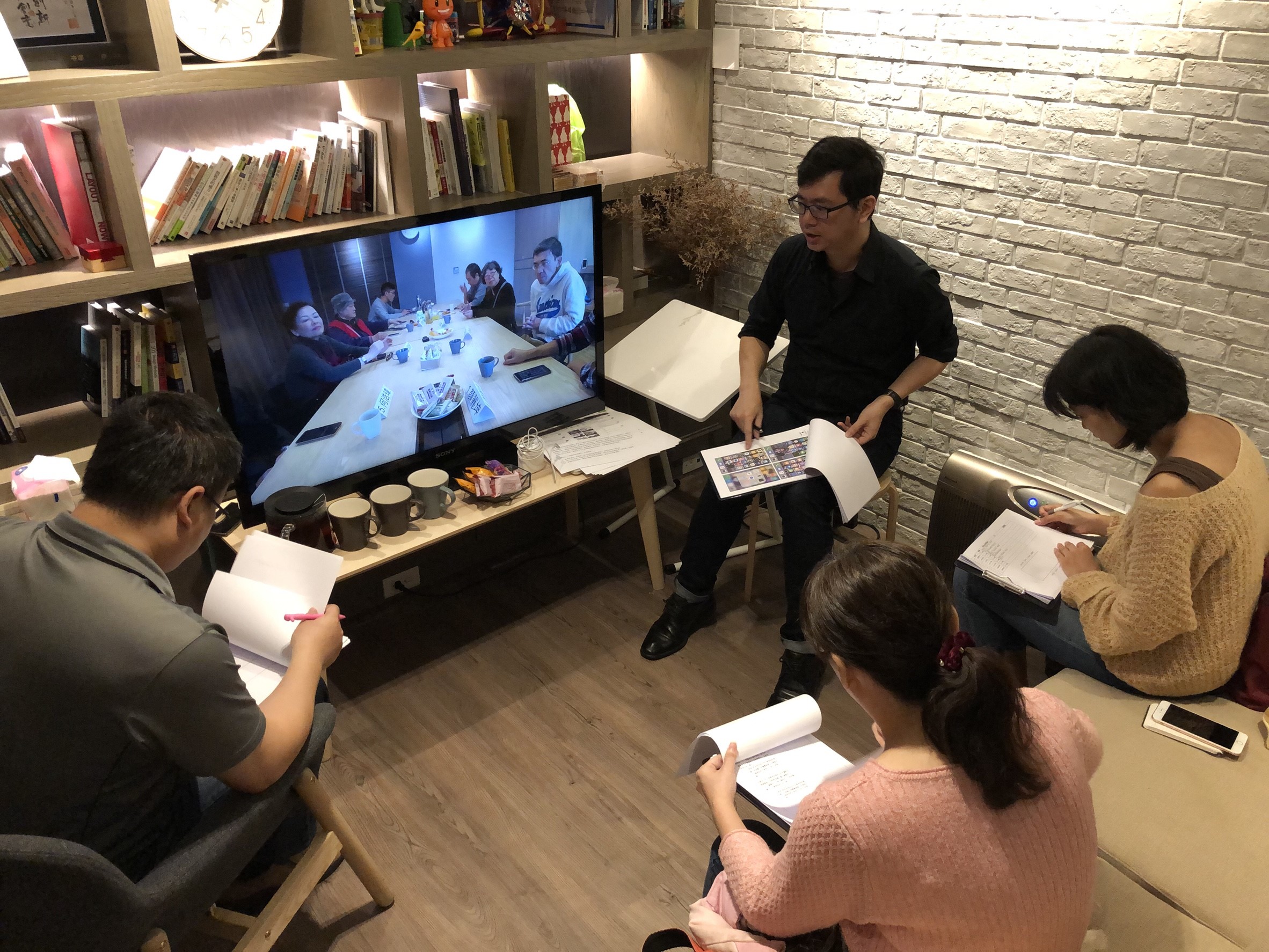 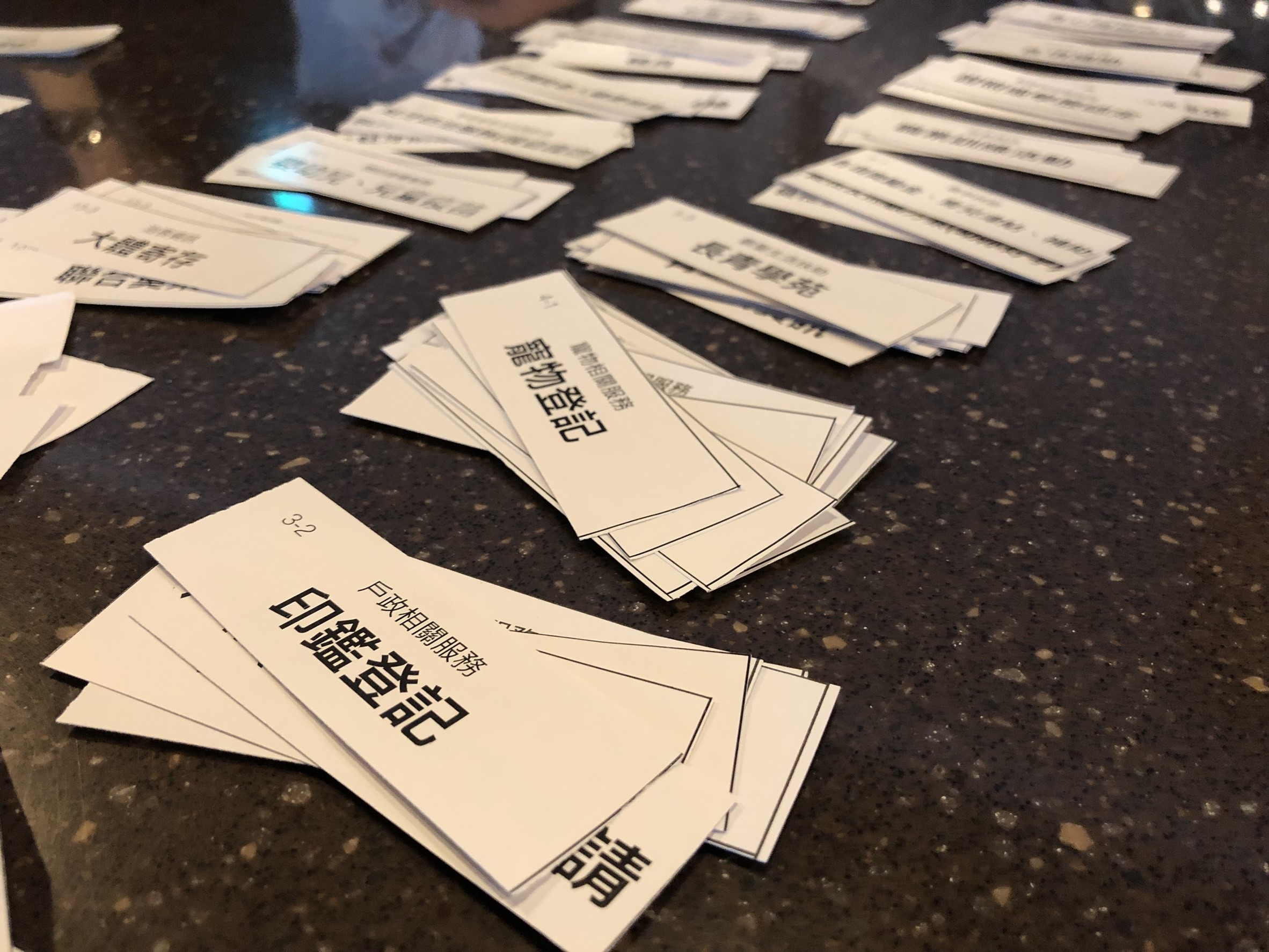 Use the results, we developed three personas (Single, Preschoolers’ Parent
, and School-age children’s parents) and user journey maps that helped us synthesize the data. We did focus on elderlies because the prevalence of internet usage of 65 years and older is only 34.8%. Additionally, many of them have difficulties using a smartphone due to the aging eyes and hand motor control. As for the minorities who are not elderly, we suggested that they could be included in these three personals. 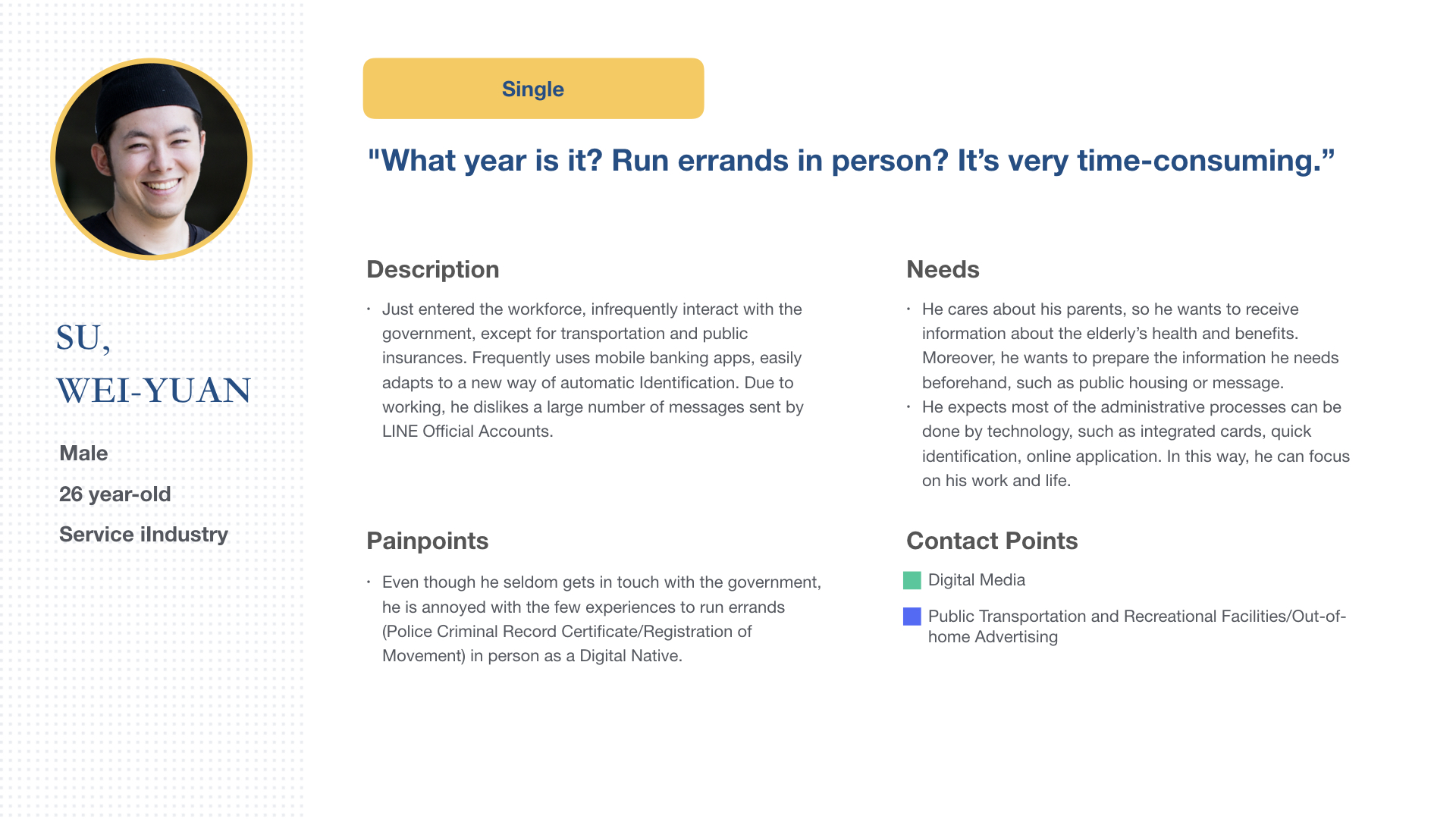 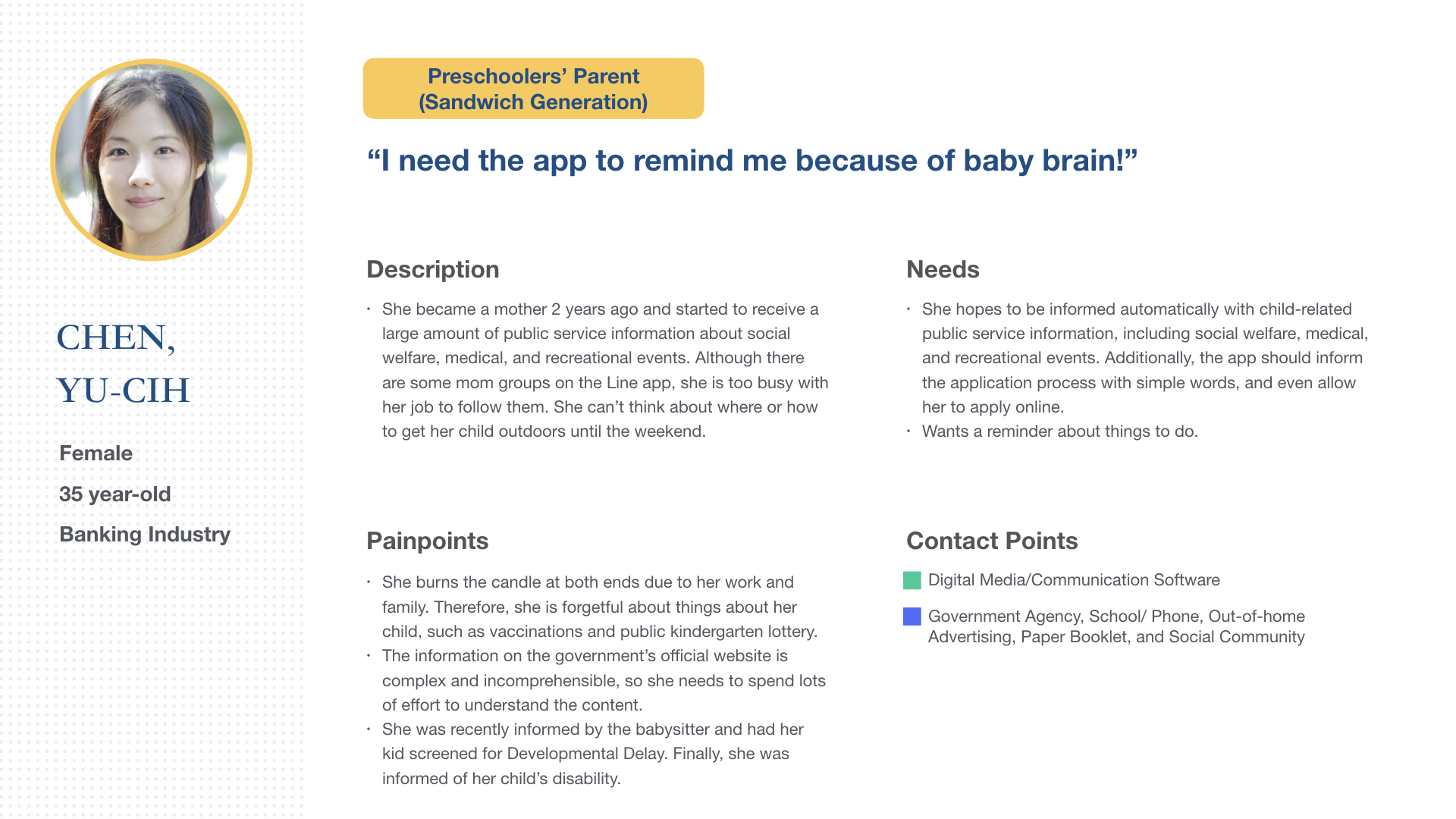 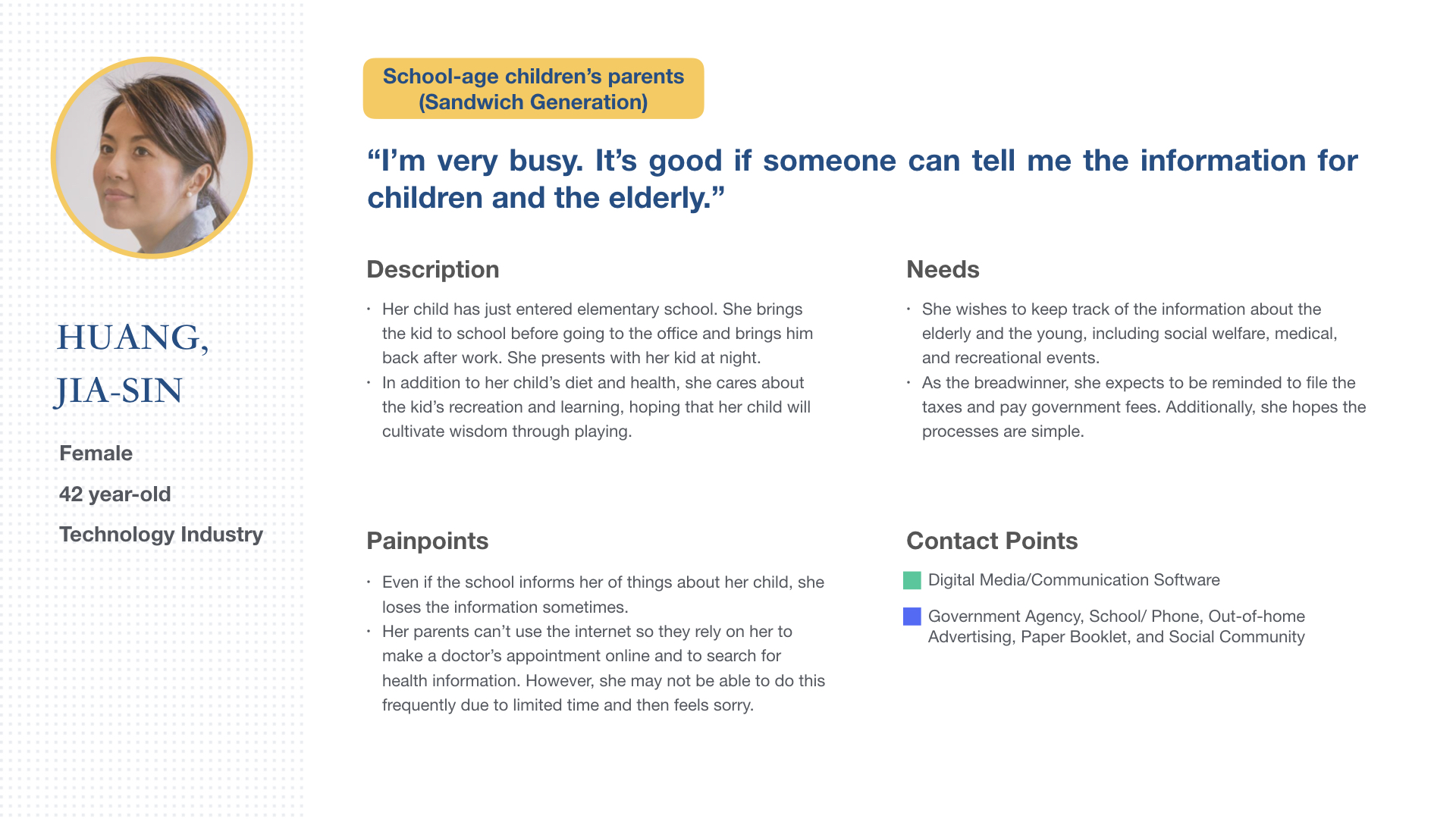 Then, we went back to the three problem aspects: Citizens’ Needs, the government, and technology, and more specifically focus on the mobile application this time. 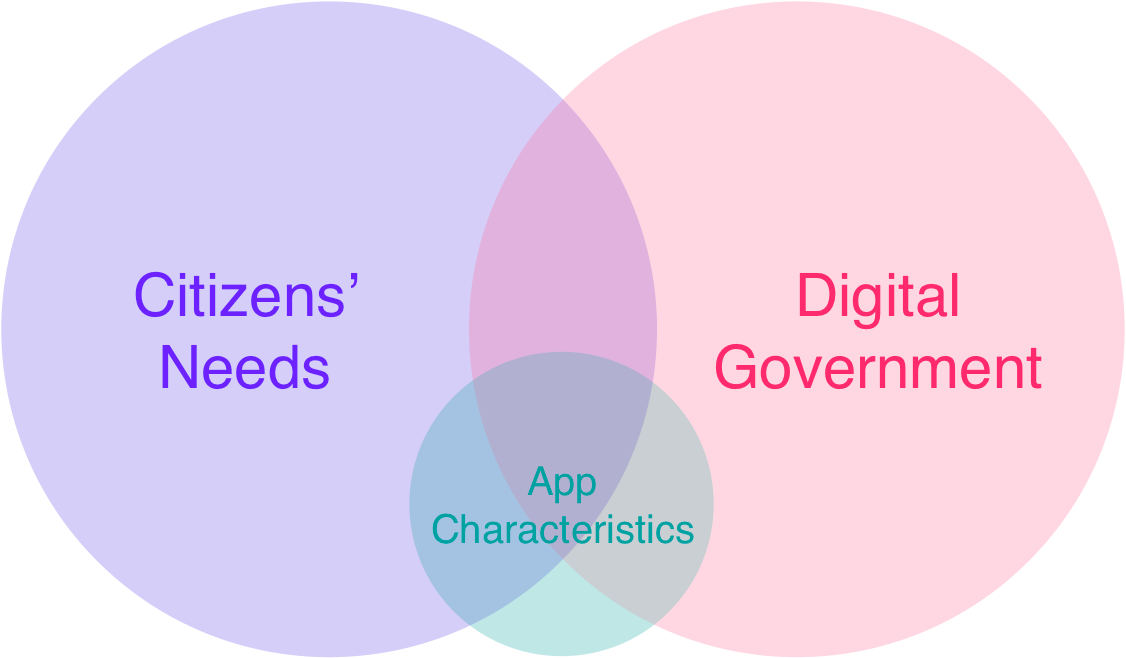 We proposed that before developing any E-government service app, it is required to consider citizens’ needs, digital government, and app characteristics. We suggest the government use the following flow to evaluate whether a service is suitable to be developed as an app or be included in an app: 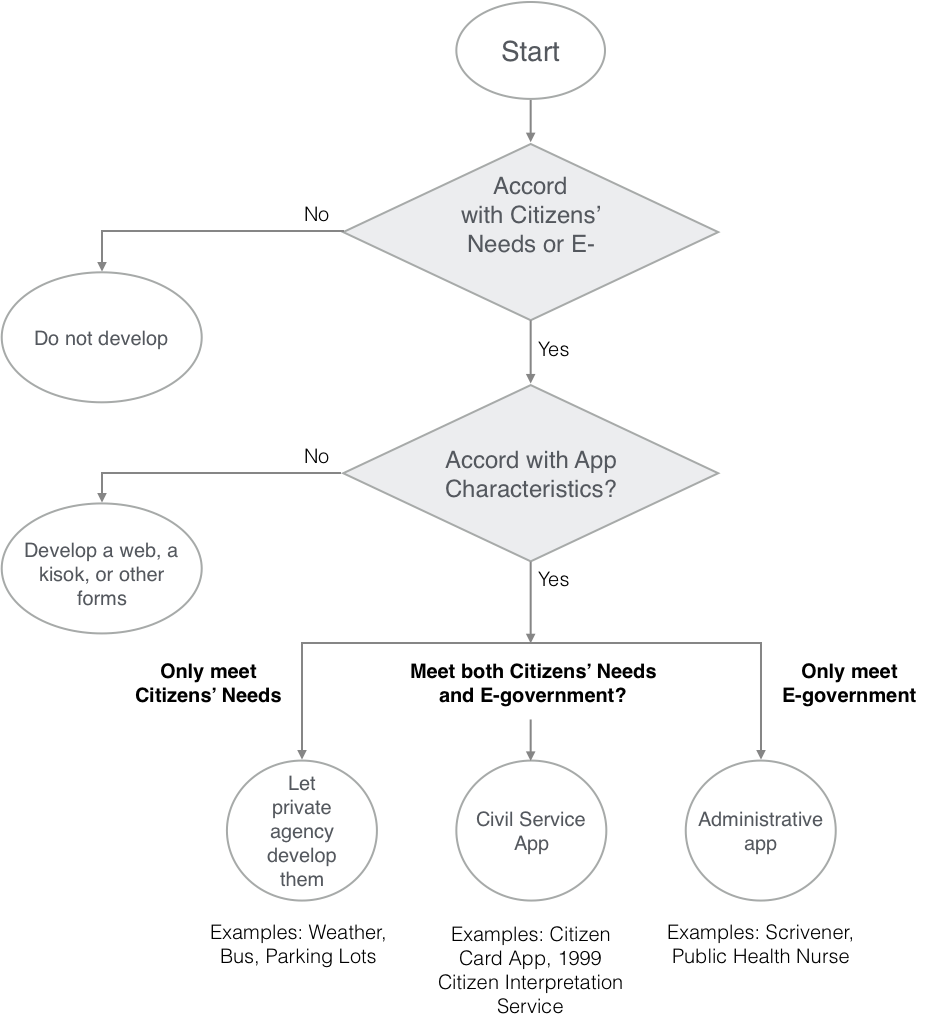 What are the Key Services of iTaipei App?

Based on the card sorting result and our observation, we created a 2-dimension graphic (citizens' need versus. competition in the market) to define what to include. We suggested that social welfare is the most appropriate service since citizens care about them most, and it is a type of service that private organizations rarely offer.

Who is the target audience?

After the analysis, we decided to focus on the "Sandwich Generation", people paying to take care of their aging parents and whose children are not yet financially stable, for two main reasons. First of all, the care of both children and the elderly is tough to balance, especially if new health problems develop in their aging parents such as stroke or cancer. Therefore, they need support from the city government to raise their families.  Secondly, according to the quantitative research, the population of this generation is the biggest, and almost 100% of them have been exposed to online services for personal or professional needs, which means the potential user base is considerably large.

Based on the insights we got from research data, we decided to focus on Proactivity, Consistency, and Personalization. The platform integrates several key elements, such as: 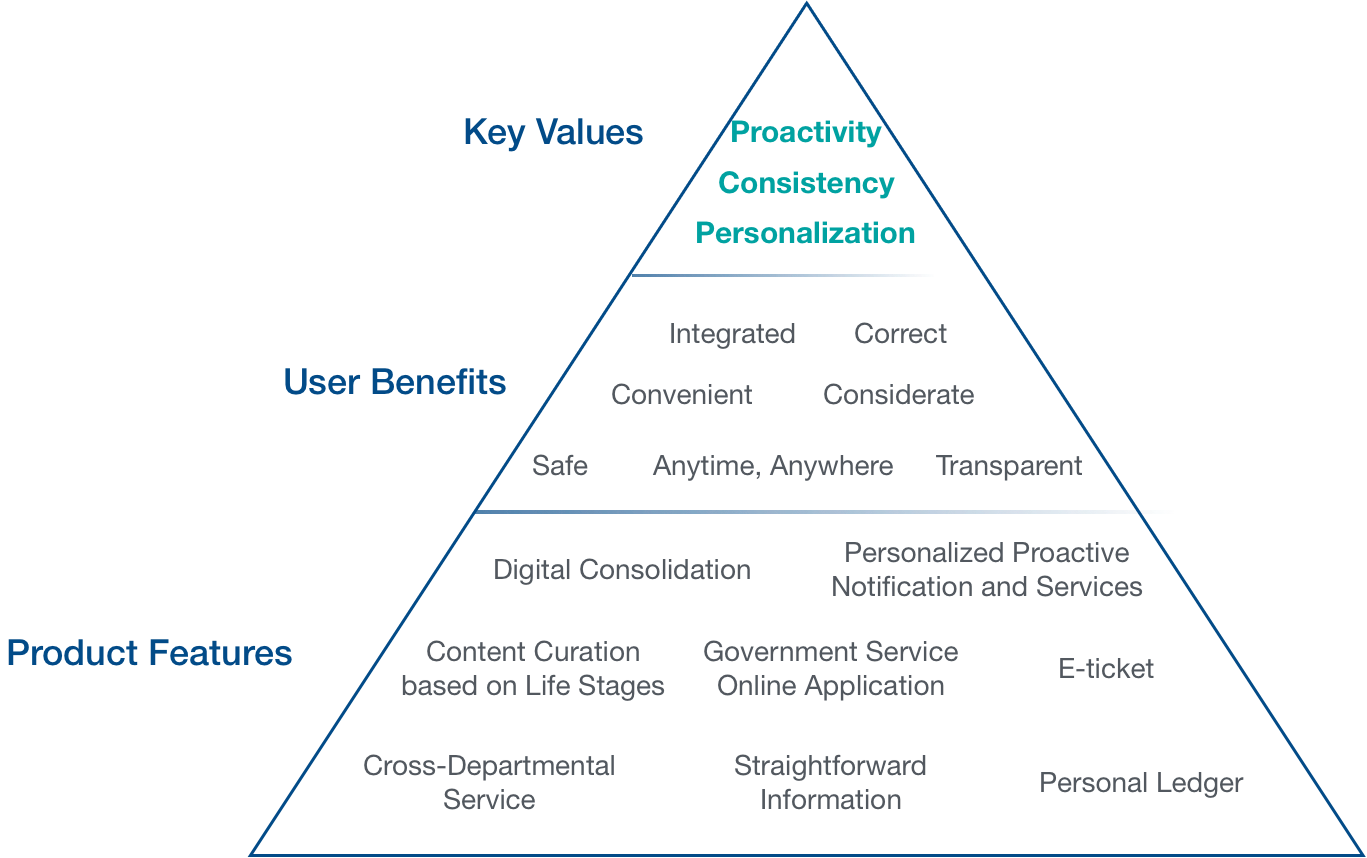 The hierarchy of iTaipei app's values 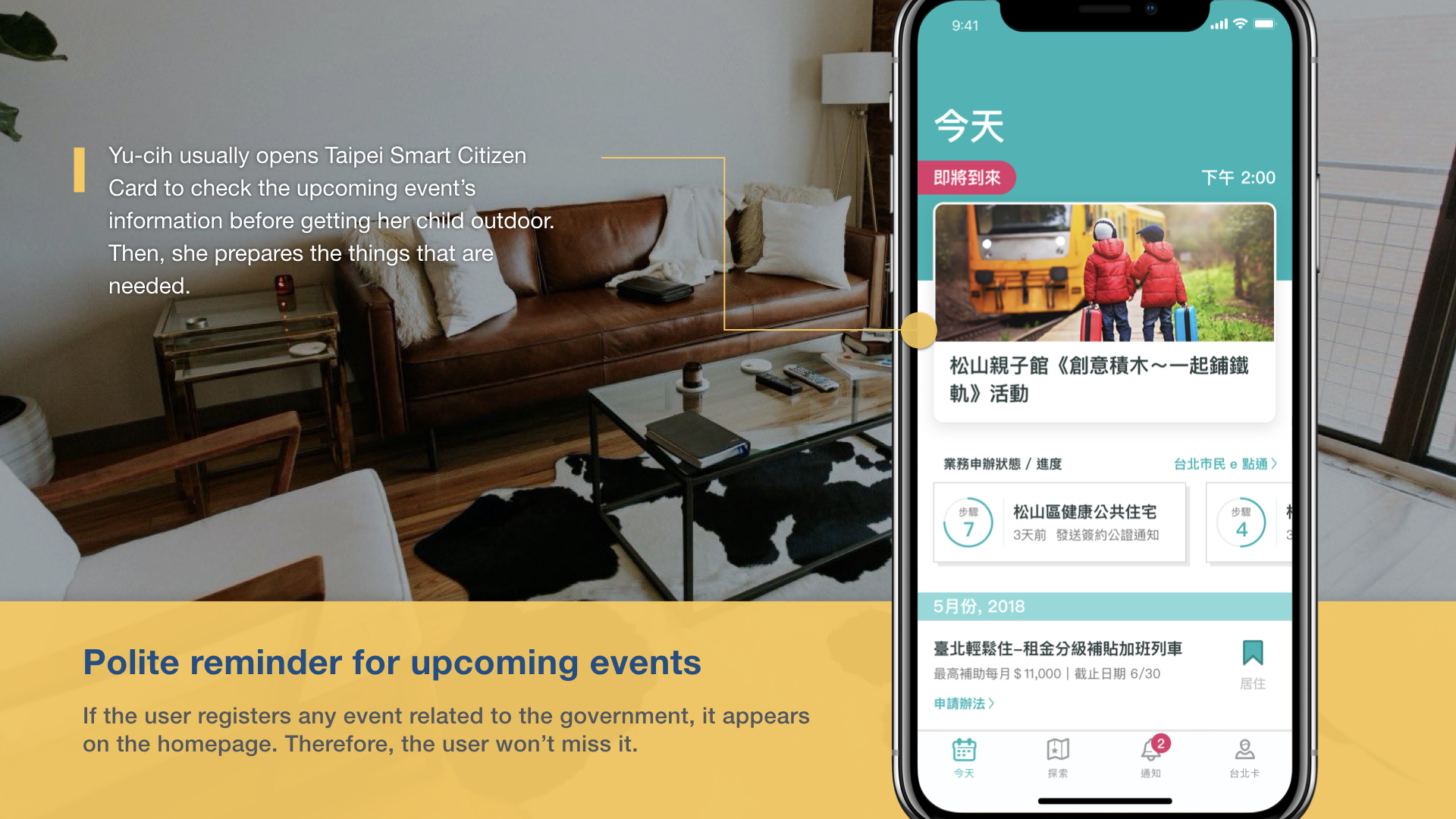 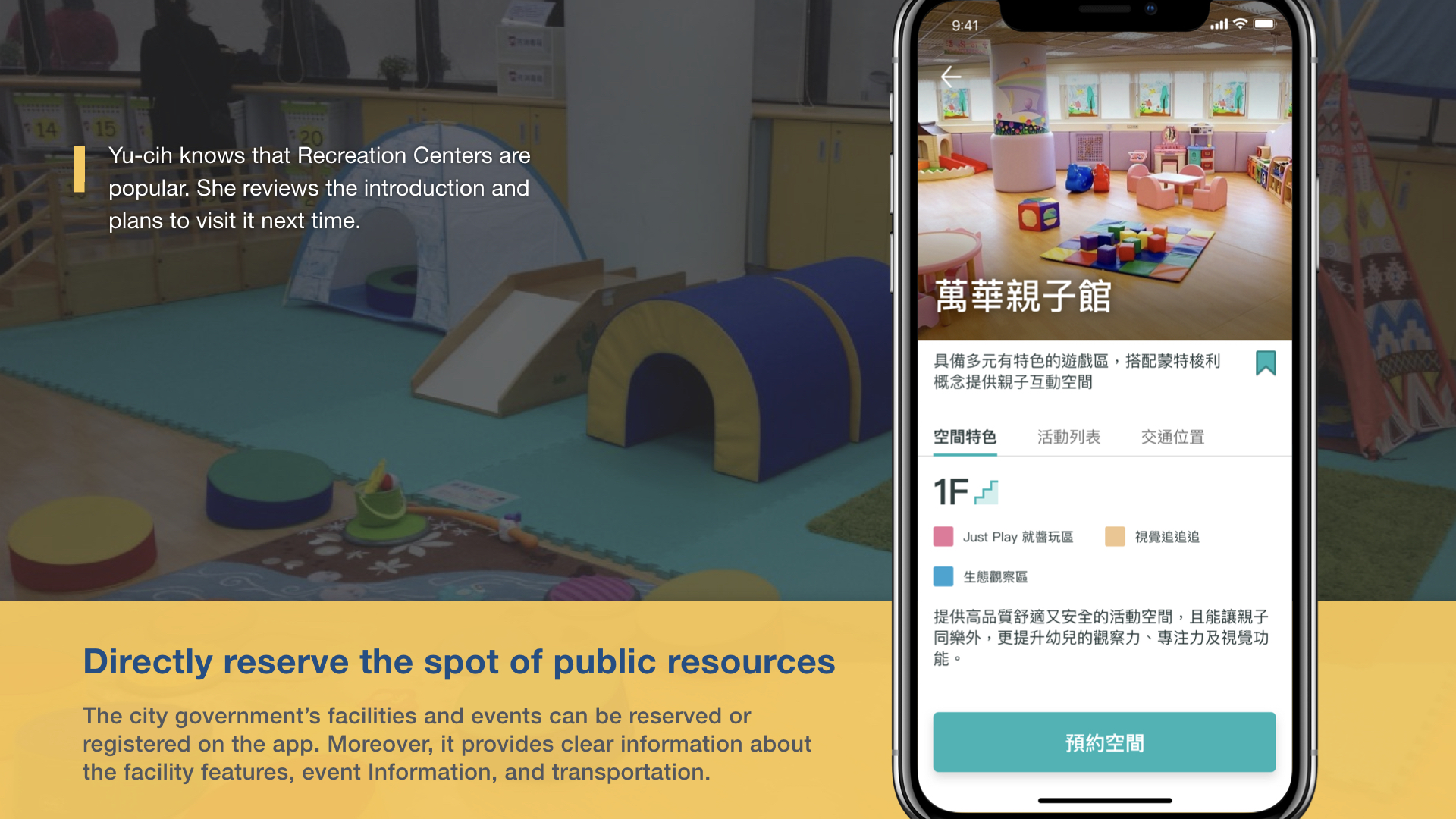 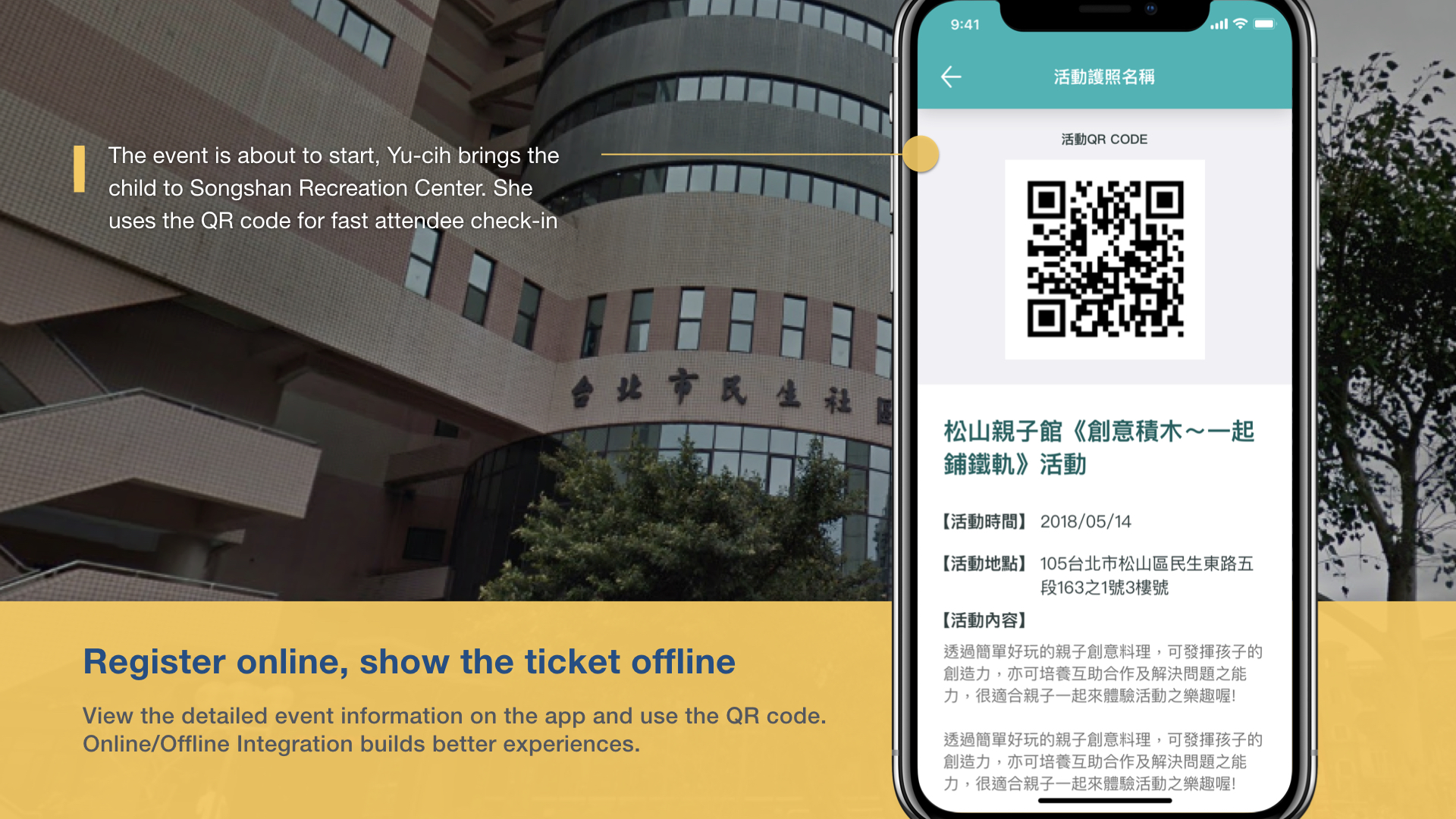 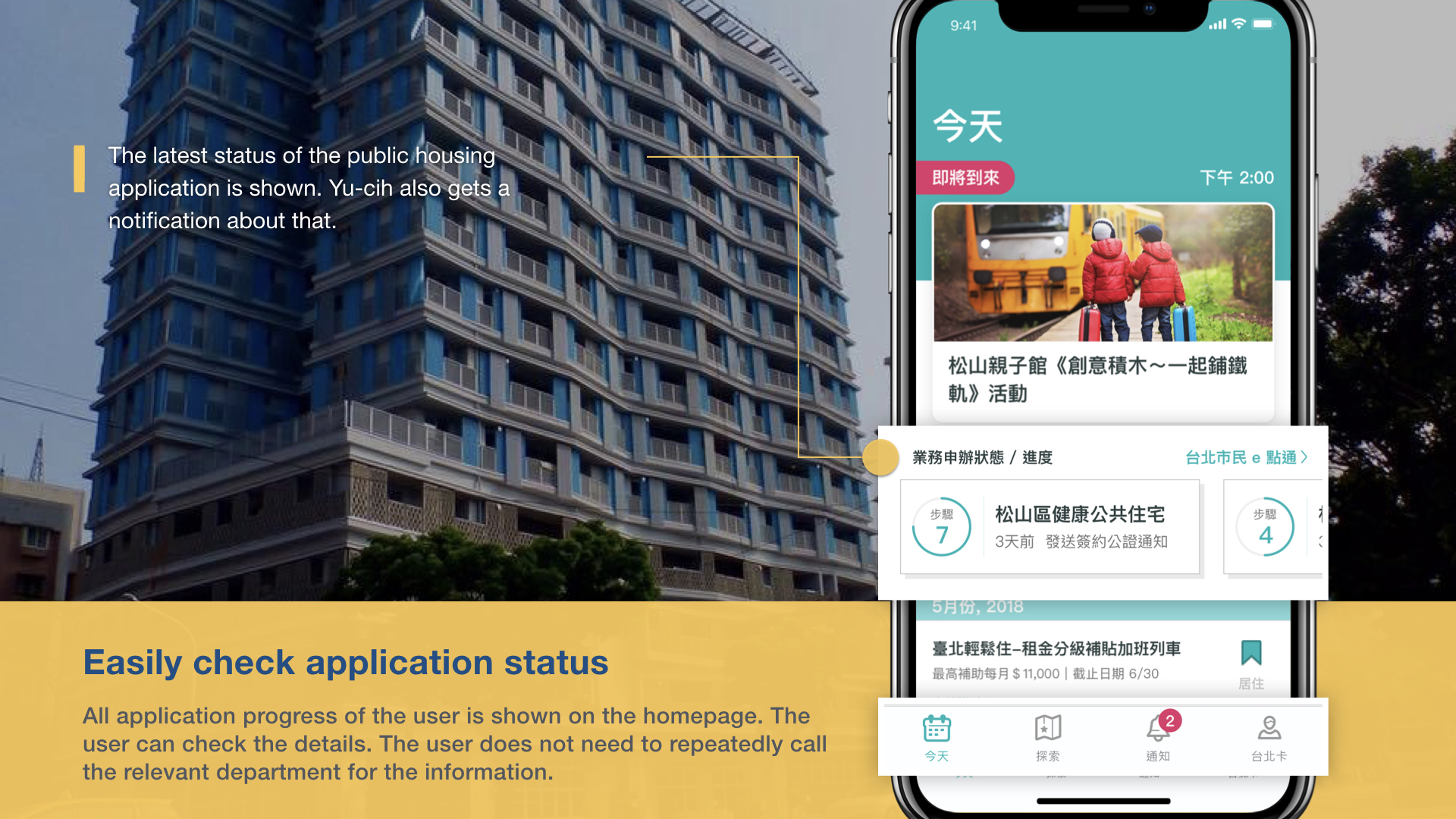 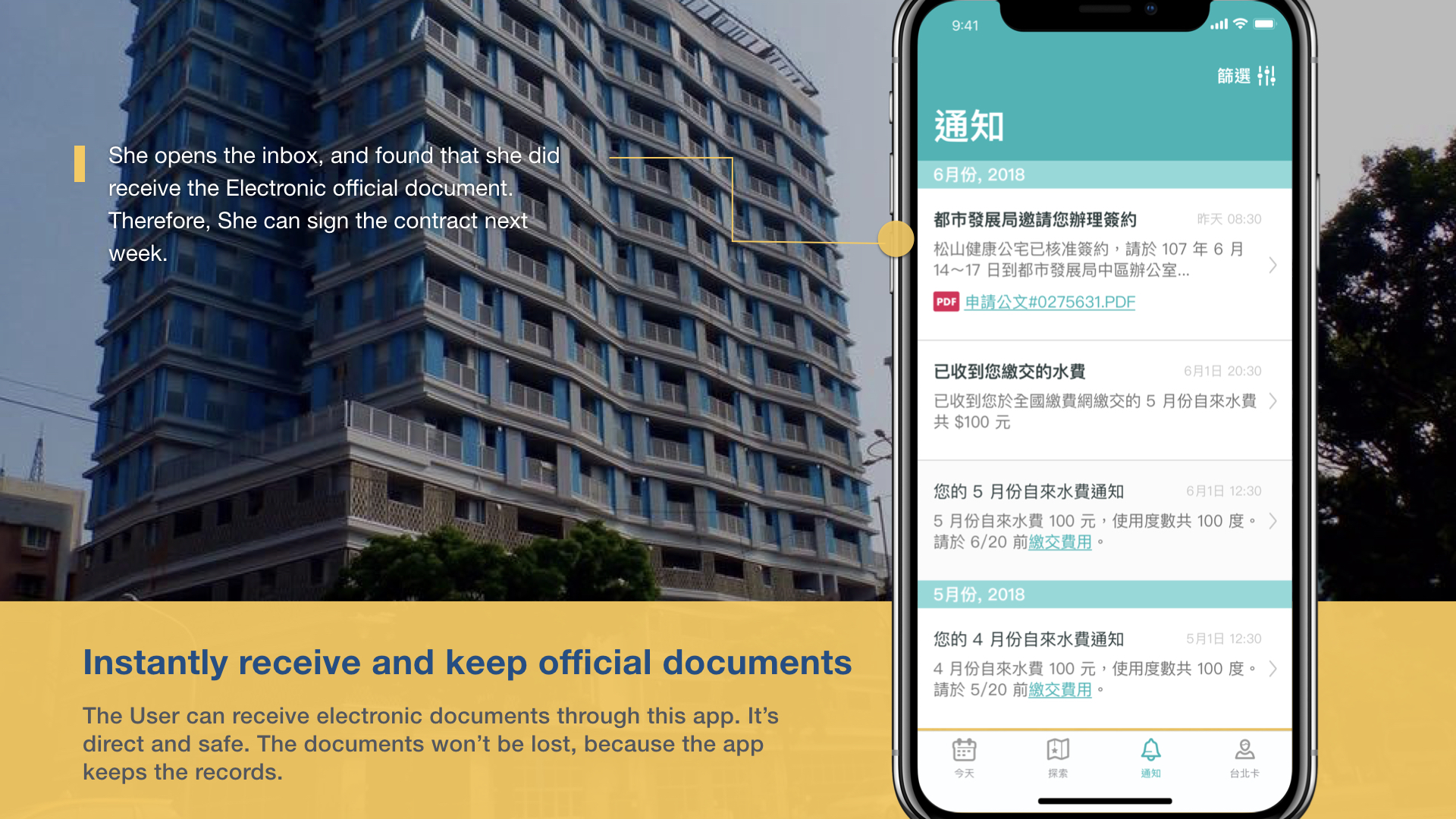 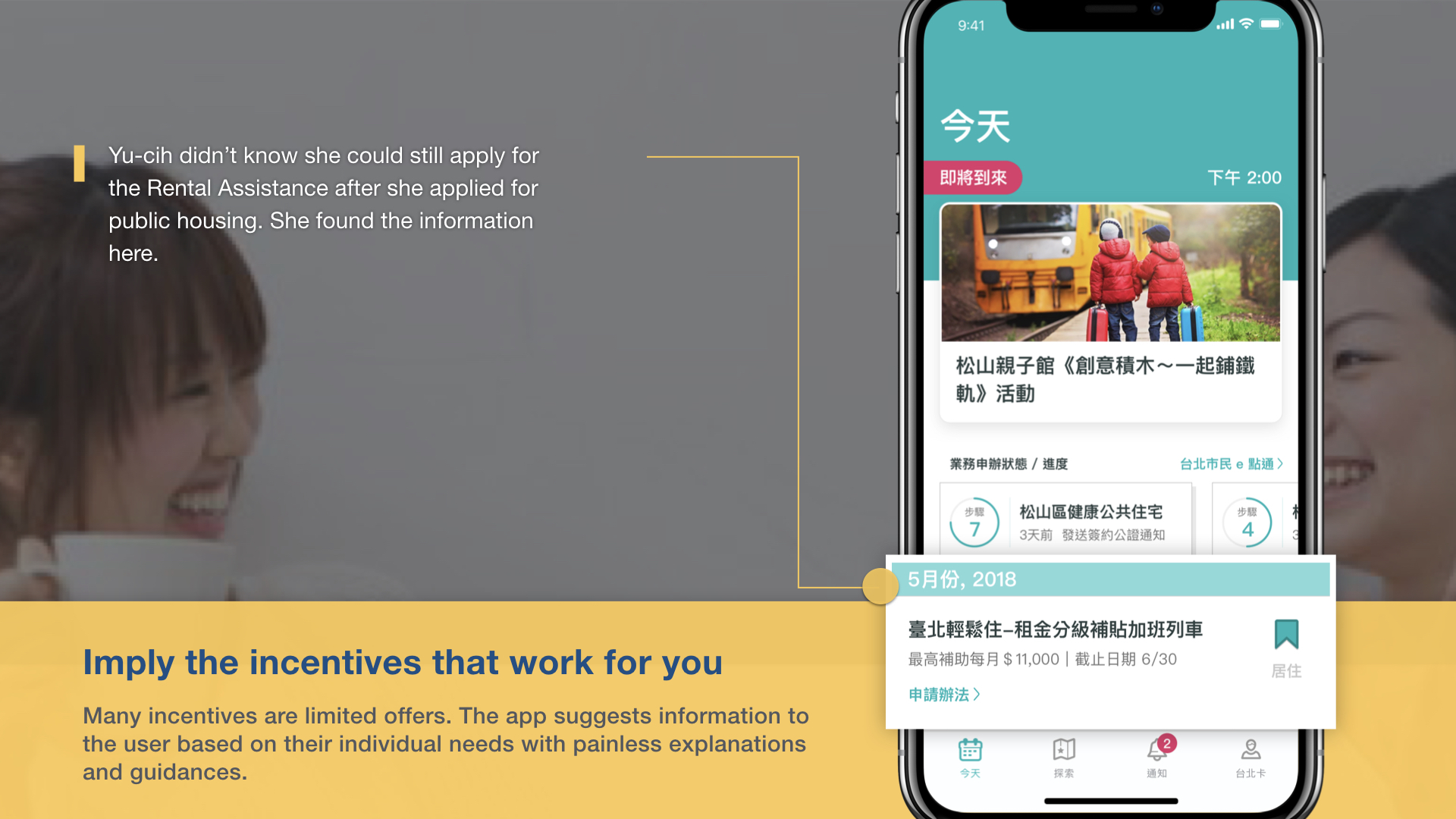 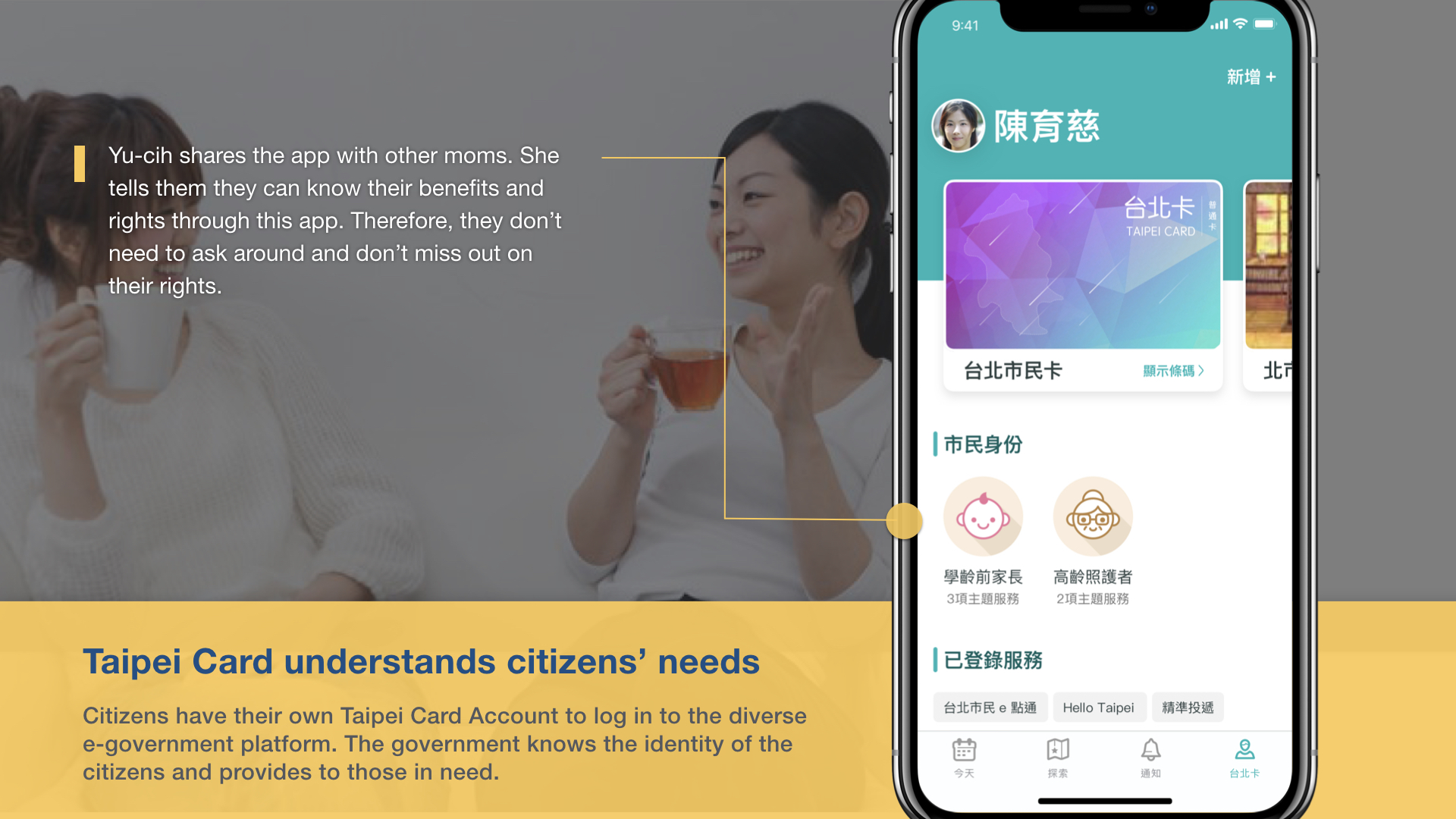 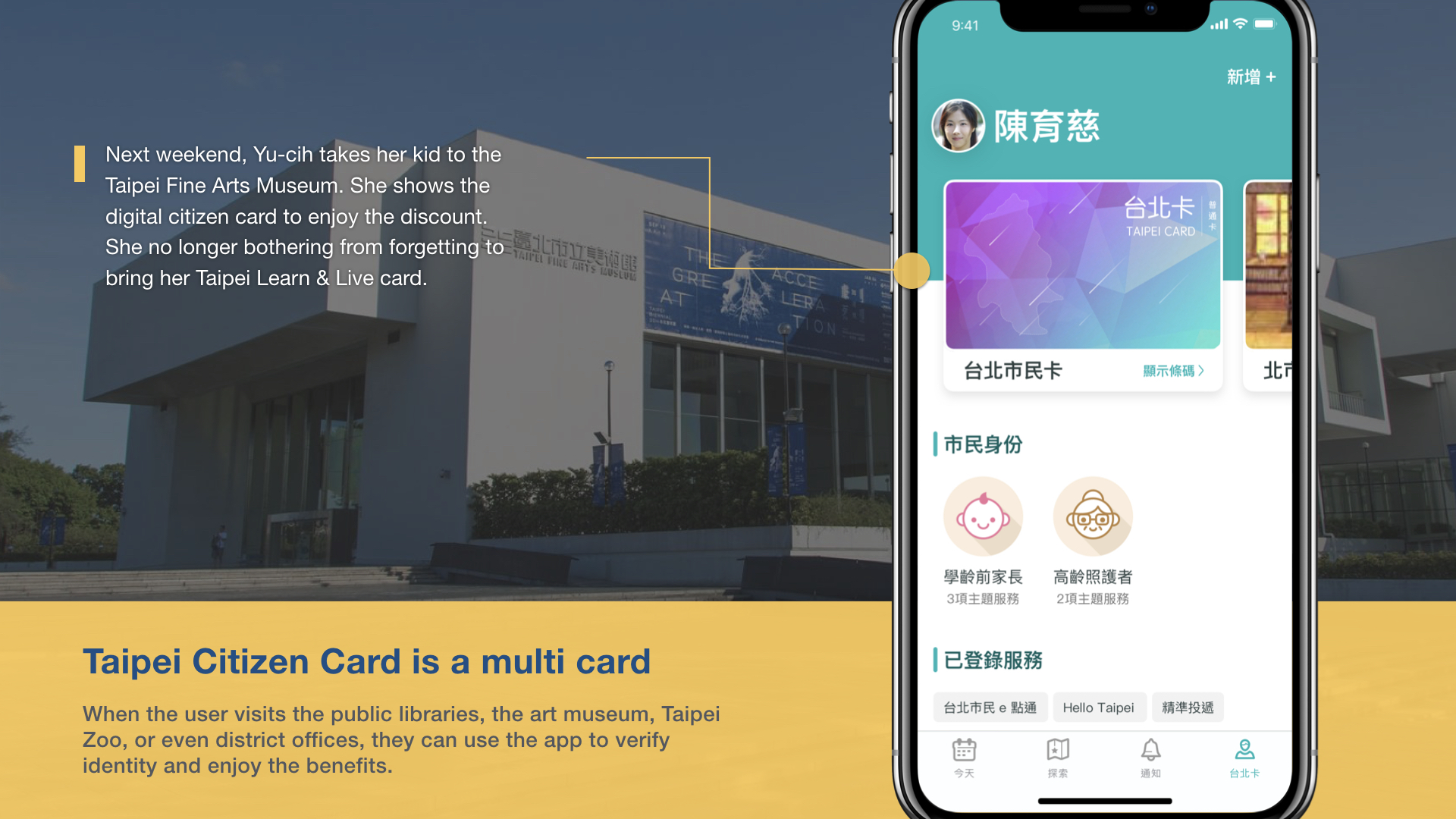 How did this project influence our client?

This project was highly valued by the client. They released the full report publicly to benefit people who are interested in UX design and public service. The number of clicks of the report’s download page on the government's website was over 4700. It is also shared more than 200 times on Facebook. There was much positive feedback from the UX professionals and the public, and it even brought a positive image for the city government. One citizen journalist said that he “wished the other local governments or the central government in Taiwan could apply these strategies to collaboratively review the digital experiences and build better public service. ”
‍
Although my company, AJA, was too busy to take on the work of the UI Design project from the city government, it drove the reforms in public app design, public services integration, and technologies.

What did I learn?

Users are experts in their life. With technology advances today, people expect many conveniences. For example, many participants mentioned the importance of integration: find all information from one place or finish all the tasks on the internet. However, it would take a huge amount of time, budget, and effort to upgrade the outdated government systems. Rather than dreaming of designing an app that is fully convenient and wonderful, which meets the user expectations, we considered all the limitations of the government. Finally, we decided on one aspect: social welfare, which was practical and actionable for our client. Moreover, the restrictions turned out to be an advantage for the design. This was because we once felt frustrated about what to include in the app. The limitation helped us focused on the public services that are strongly demanded and less provided by private organizations.

We had more than 50 participants in total, including citizens, stakeholders, and experts. Each interview and focus group was longer than 1.5 hours. We used the Realtime Board (currently called Miro) to post takeaways of each interview and group them by age, type of services, situation/scenario, identifying differences, and figure out the common characteristics. We worked hard to find inspiration to analyze the data from different aspects to cope with the special behavioral patterns of the 4 groups of users. Eventually, the characteristics of the app technology combine with users' expectations worked well together. It made us think about the solution to customize to each identify profile, providing public services they may need and want to use within the app.

🔆  I'm Ya-ching, a product designer with 2 years of work experience! Let's get to know each other!